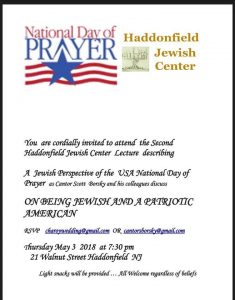 The new Haddonfield Jewish Center will be hosting a wonderful get together with folks of all religions and traditions to speak about this wonderful National Day of prayer. Thursday, May 3, 2018 at 7:30 PM: 21 Walnut Street Haddonfield, NJ 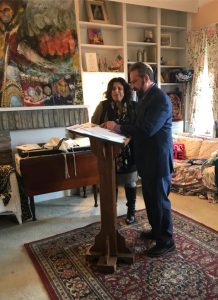 Signing the founding papers for the new Haddonfield Jewish Center.

Were there Jews in Colonial USA? History books teach millions of students that the colonies were founded by settlers who ran away from religious persecution in Europe: Puritans who sailed on the Mayflower and founded New England, Catholics who ran from bloody civil wars in England and France to found Maryland, Quakers who fled England to found New Haven, Conn, Providence Rhode Island and also Haddonfield. Were there Jews among those colonials who eventually participated in the USA revolution, and if so what were their daily life traditions?

Several scholars have written about the Jews of Philadelphia and their role in the revolutionary war. In New York City, the Spanish and Portugese synagogue is several centuries old, dating to the early colonial era there. In Newport Rhode Island, the Touro Synagogue, now a National treasure was founded in the 17th century. Savannah also has a strong community with col.onial roots that thrives in the 21st century.

Mindful of this important strand of USA history that has been tucked away in the crevices of archives if not hidden entirely, the Haddonfield Jewish Center in collaboration with the Indian King Tavern will offer on Sunday May 20, 2018 at 2pm a historical perspective on the Jewish life at the time when the America was being born.

Using tradition music from the colonial era as a guide, I will lead songs from traditional rituals that existed for the harvest holiday of Shavout, a time when the Old Testament was given to the people at Mount Sinai. I will explain some of the traditions and describe the role that these traditions played in shaping contemporary Jewish activities that remain vibrant today.

The event is free of charge and open to everyone of all faiths.